For those who consciously choose to source, and use, safety conscious personal care products, it is not uncommon to hear that mainstream companies are catching up by also removing potentially harmful ingredients. That can only be of benefit to everyone.

We can become complacent over time, and take for granted the great products that we already use. It sometimes takes a wake up call to remind me of what we are blessed with.

One of those wake up calls came in a newspaper article recently. It reported the death of a boy in Manchester who apparently over-used a product that everyone simply takes for granted…..the common old deodorant.

What is interesting is that a similar article from a different newspaper, also reporting a similar tragedy, appeared dated 10 years previous.

According to the first report, the boy’s blood recorded 10 times the lethal dosage of propane and butane.

The second report, dated 10 YEARS later, reports the boy apparently died of cardiac arrythmia caused by exposure to solvents in the product. See images below

So what has changed in 10 years?

Well, it appears that there are at least some products out there that, in spite of accidental deaths occurring, still appear to contain ingredients that have the potential to cause death, if used in a manner not in accordance with the warnings on the container. And these are ONLY the deaths that have been recorded in the press that people have compiled. It would not be unreasonable to ask just how many deaths have occurred worldwide from using a deodorant – if such records exist.

An interesting point, is in the most recent media report, where in the last sentence it is stated that ….He (coroner) said that he was satisfied (manufacturer) gave enough warning on its cans that excessive amounts were not to be used in confined spaces.

So, in spite of at least one death having already been reported ten years earlier, the main focus appears to remain not on removing any potentially harmful ingredients, but ensuring to the coroner’s satisfaction that the label provides adequate warning. There does not appear to have been any focus on rectifying the concern by recommending the removal of any of the potentailly harmful ingredients that may have contibuted to both tragedies.

Where do most people use a deodorant? In the bathroom, possibly the second most confined room in the house.

Who EVER reads the label on a deodorant before use? And WHY would they? It’s only a deodorant after all, used by virtually everyone, at least once every single day.

It is definitely re–assuring to be able to source and use personal care products that, due to their ingredients, are NOT required to display health warnings and safety instructions for their use. 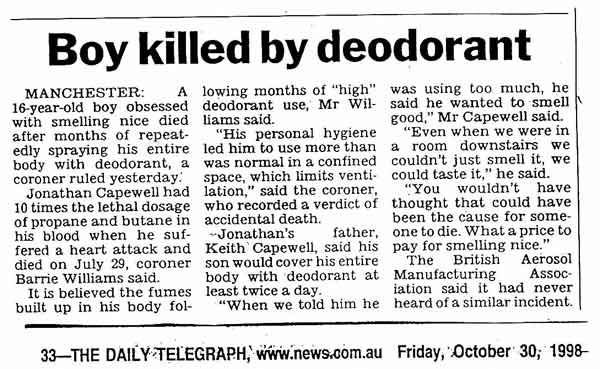