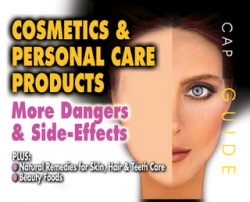 Can We Have A Healthy Home With Products Which Don’t Hurt Us??

We are all familiar with the saying “It’s the final straw that breaks the camel’s back.”

Today that saying is applicable to our well-being, the “straws” being all the factors which are causing our bodies to suffer “dis-ease” and which range from poor nutrition and toxicity to being stuck in a traffic jam every day.

Some things we have no control over but we can take control of others and the more “straws” we can remove, the better for us and for our well-being.

One “straw” that we can remove, thus lifting an unnecessary burden from our lives, is the daily poisoning of our bodies and homes.

Over the last few years, ordinary people, i.e. non-scientists like you and me, have become increasingly aware of the dangers posed by man-made chemical ingredients in products we use every day at home. Two TV programmes “How Toxic are You?” and “How Toxic are Your Kids?”  enhanced this awareness, so I decided to take this opportunity to share with you what I have learned.

I firmly believe that everyone has the right to make choices. To do this effectively, we need knowledge.

It’s hard to believe that the most dangerous place is inside our own home.

A 15 year study showed that “women who worked at home had a 54% higher death rate from cancer than women who had jobs elsewhere.”

In 1989, a study by the US Dept of Occupational Safety and Health showed that of 2,983 chemicals used in personal and household products:

In 2003, a “ContamiNATION” study by the World Wide Foundation found as many as 70 different chemicals in the blood of UK citizens.

Household products release toxic vapours even when they are not being used. We don’t need our eyes to tell us where the washing powders and cleaning products are in the supermarket, do we?

Then there are the air fresheners. Do you know it takes at least 100 chemicals to make a “perfume”? Have you ever read the warnings on the back? Nasty!

“Most homes have airborne concentrations of hazardous and toxic chemicals 2 to 5 times higher indoors than outside. Some homes are 70 times higher!” (US Environmental Protection Agency 1989)

The most common ingredients to watch out for in personal care products are these (although there are more than 100 alternative names for the first one!):-

(You will find a more comprehensive list to print out in the DOWNLOADS/Audio section so you can check your cupboards.)

A lot of chemicals are safe until mixed with something else e.g. Triclosan and water = toxic dioxins.

So why is it in toothpaste??

Thousands of ingredients used in the household have never been tested, so no-one knows whether they are safe or not.

Some GOOD NEWS is that…

….just as not all natural substances are safe, not all chemicals are harmful. In fact, some are very beneficial.

The trick is knowing which is which.

And, here’s the REALLY GOOD NEWS…

Someone I know told me about a Safety-Conscious company who do know the difference.

So now we can take out the guess work by buying the full range of effective every-day-use products from the company who, more than 25 years ago, pioneered the formulation, manufacture and distribution of products where more than 3000 commonly-used ingredients are avoided because they are known to be harmful or have a question mark over them.

I have transferred my spending on my personal and household products to them. You can too.

You don’t have to go and find your products and carry them home. You can order by phone or on-line and they will be delivered to your door.

Do you want the benefits of a Healthy Home?

There are other benefits for you too. Check out “Share the Love” 🙂

Please contact me with any questions. I’m happy to help you get the best from your choices.